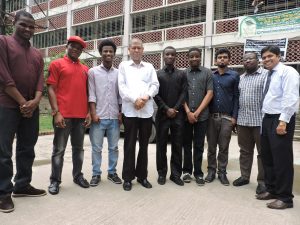 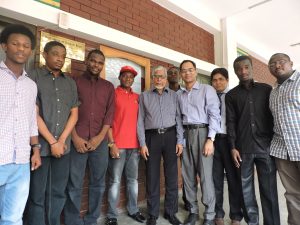 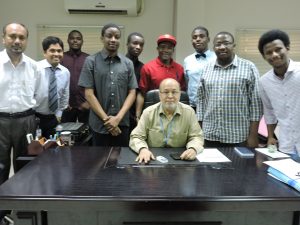 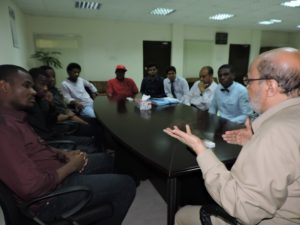 Eight members of the Nigerian Students’ Association of Bangladesh visited MIU on 14 June 2015, and a successful meeting was held with the Honorable Vice Chancellor, Prof. Dr. Choudhury Mahmood Hasan.  Alongside, an informal meeting was held in the Registrar Office where Honorable Chairman of MIU Trust Mr. Shah Abdul Hannan and Member of the Board of Trustees of MIU Professor Dr. Shamsuddin Ahmed were present.  The delegates met the Dean of Arts and Humanities and Head of English Professor Hemayet Hussain Khan and the Dean of Business and Economics and Head of Business Administration Professor Dr. Ruhul Amin in their respective offices.  They also visited the MIU Library and few classrooms at Gulshan campus. The delegates also met few faculty members and officials at MIU. After having lunch at the TOPKAPI restaurant, we arranged for them a short visit to the Mirpur campus where they met the Dean of Engineering, Science and Technology Professor Dr. Mohd. Ekram Ali Shaikh and the Head of CSE Associate Professor Mr. Ashraful Islam.

After visiting both the campuses they arrived IUT safely right after the Magrib prayer on that day. Student Representatives were highly pleased to see the environment of MIU and also with the cordial hospitality, especially by the great speech of Honorable Vice Chancellor which motivated the visiting Nigerian Students to a great extent.  They were also happy to meet the Chairman of MIU Trust, and also to meet Prof. Dr. Shamsuddin Ahmed who worked for a long time at IUT.  Two undergraduate Nigerian students had shown their interest to complete their MBA from MIU after completing their graduation at IUT.  Few of them said that they would be discussing seriously for the study of Nigerian Students at MIU at all possible levels.  They also said that they would try to arrange a visit to MIU by their Country Ambassador to Bangladesh when he will be coming to Bangladesh, Insha Allah. They further expressed that they had received homely behavior by the faculties and officials of MIU.  This is their first visit to MIU, which is expected pave the ways for them to come again and again and to develop a good relation with the Bangladeshi and Negirian students and faculties.